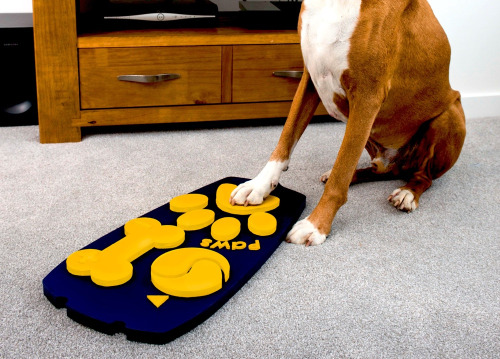 Dog owners feeling guilty for leaving their pets alone at home for too long will son be able to take comfort in the fact that at least the animals won’t be bored. They’ll be too busy changing TV channels and enjoying their favorite shows thanks to the world’s first dog-friendly remote control.

UK-based pet food brand Wagg apparently surveyed a number of pet owners and found that 91% of respondents said their canine friends regularly watch TV with them. Inspired by this interesting finding, the company teamed up with Ilyena Hirskyj-Douglas, an expert in animal computer interaction design at the University of Central Lancashire, to create the world’s first remote control for dogs. They came up with a prototype for the ingenious device which is currently in a trial and analysis period. The oversized remote is made of waterproof hard-wearing plastic, so while pooches can chew on it like any other toy, they’ll have a tough time actually causing any damage. It has three large, raised, paw-friendly buttons shaped like a bone, paw and ball which dogs can press to turn the TV on or off, change the channel and even “pawse” a show for later viewing, in case they need a potty break or a short nap. The buttons squeak when pressed and the device also features a hole through which a rope can be tied so dogs can carry it around the house.

“We know that people can feel a little guilty about leaving their dogs in a room alone for a short while — whether it’s to pop to the shops or cook dinner in the kitchen,” said Wagg spokesman Dan Reeves. “We wanted to create something that would keep the dog entertained and reassure owners of their well-being.” A remote control was apparently their best bet since research shows that canines are really into watching TV. “Our studies shows the average dog now watches more than nine hours of TV a week, showing technology is already playing a huge part in our pets’ lives,” Ilyena Hirskyj-Douglas told the Sunday People.

After Wagg performs all its tests and perfects the dog-friendly TV remote control, the company plans to approach tech companies about getting the device into production. So you on your canine pet may soon be fighting over control of your TV set.